Review: The Giver by Lois Lowry 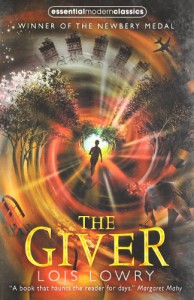 Scanning Groupon the other week for a cheap break somewhere far away and relaxing I saw what looked perfect: a trip for two to Taiwan. 10 nights, stupidly inexpensive and a completely stunning location judging by the pictures. Think crystal blue ocean, white sand beaches and brilliant wall-to-wall sunshine. Sounds perfect right? Well, there were conditions ... You had to be over 35 and sit through a compulsory three hour talk about timeshares. I imagined the hosts making it their mission to sell, sell, sell to guests throughout the holiday not exactly creating a relaxing and enjoyable atmosphere. I suppose this explains why the holiday was advertised for so cheap (believe me, it was super cheap even for Groupon) - they're hoping to make their real money pedalling timeshares while they have you cornered and tipsy, trapped in Taiwan!

This deal reminded me of The Giver: Lois Lowry lured me into the story with the promise of a fresh dystopian tale of a little boys courage and smarts in the face of a controlling and secretly cruel society where choices are limited and citizens have an inability to decide their own destiny and experience such glorious things as love, colour and music. What I actually got was a very hard sell of the author's message of the dangers of creating a "nanny-state" (something which the UK is regularly accused of being by the newspapers), the importance of having the freedom to choose our own path and take risks, and how balance (taking the good with the bad) is vital to provide a life worth living.

The Giver was so disappointing as the plot was not strong enough to hold this moral lesson without making the entire thing simply a big, fat preach. Lois Lowry: If you don't care about plot, about believability, about creating a connection between the characters and the reader and about putting together a satisfying story then don't write a novel - write an essay.

There were so many holes in the plot that I felt myself tripping into them almost constantly. The whole thing is so paper thin it's unreal. Why did the community have anti-aircraft weapons if they had no memory of war? Why would they even have any concept of defence or attack?

Why did Jonas' dad, despite being obviously caring and compassionate have no problem accepting Gabe's imminent euthanasia? He had the attitude of "Oh well, another one bites the dust. Can't win 'em all" even though he had spent months caring for the little boy individually and even had him living in his own home. What kind of a stone hearted monster just smiles and calmly tells the rest of the family that the baby that they have come to know and have nurtured and encouraged all that time is going to be killed in the morning before they pop off to enjoy that year's ceremony?!

How is this community sustained? There are simply not enough people to support it. Children aged 12 are given their work assignments but it will take years upon years before they are adequately trained enough to do these jobs - you're not seriously telling me that they let 13 or 14 year old "doctors" loose on real live patients Ms Lowry? So how is there enough newly qualifieds to replace those who reach retirement age and slink off to the house-of-those-without-children or whatever it's called?

Is everyone in the community vegetarian? If they are then I applaud them, but I find this very hard to believe, and yet they have no idea what an animal is. You don't get beef without cattle.

What's the situation with the sterility of the place - the constant weather, the lack of wildlife, the greyness. How is this even possible? None of it is explained. Is there a giant umbrella over the community? Is there some kind of invisible fencing around the perimeter to prevent the inevitable squirrels and mice and crows entering? Is everyone born with some kind of colourblindness gene? All these circumstances are stated as fact with absolutely no follow up explanation of the mechanics, not even briefly! Makes the whole thing rather unbelievable.

There are so many more issues with the plot you wouldn't even believe! The entire thing is one nonsense piece of information strung, rather unskilfully to the next. The writing is very poor quality and amateurish. I appreciate this book was actually written for children (hmmm .... Really?) but that's no excuse for lazy sentence structure and sad, flat description.

And the end! What happened there, Ms Lowry, hmmm? Got bored writing? Run out of ideas? Or just discover that you'd already made your point about society and didn't feel the need to give a rounded, satisfactory ending? My interpretation of the ending is that Jonas and Gabe die. In my mind the Giver was a lying scumbag and knew that Jonas would die out in Elsewhere and so happily came up with a plan that the boy would set off into the unknown, knowing full well that when he collapsed from hunger or got eaten by wild animals or whatever that the memories would return to the community and he'd be safe in his little home, ready to help them though the pain of the memories of suffering, loss and heartbreak which they had been shielded from for generations. This way he would have the burden lifted from his shoulders and not be put in a moments danger, unlike poor trusting Jonas! What a horrible end to a kids story! It was never made clear that this was the intended interpretation of the end, this is just what I pieced together from the evidence. I suppose everyone can make up their own mind. The ending, like the entire story was completely flawed though. Like, where did Jonas think he was going when he set off into the wilderness on his little push bike? He really did not think that one through .....

I am not going to Taiwan for the same reason I will not be reading any of the companion novels to The Giver ..... I do not want the experience compromised by a sales pitch.