Review: The Unbecoming of Mara Dyer by Michelle Hodkin 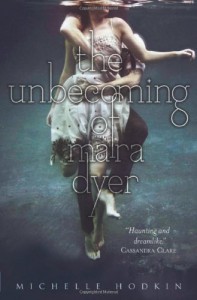 *There are some very mild spoilers ahead*

I'm being generous with my three star rating because I think maybe I just didn't get this book. I mean, it's got a pretty high average rating of 4.13 on Goodreads and all those people who pushed it up to these giddy heights can't be wrong. Can they ?!!

We start out with a pretty creepy and sucks-you-right-in prologue of Mara Dyer introducing herself under her false name as suggested by her lawyer because *gasp* she's a murderer. What ensues in a freaky slow burner of a story about Mara Dyer and her hideously bad luck when it comes to people, you know, staying alive when she gets mad. Add to this the required hot dude, the mean girl and the clichéd best friend and we've got ourselves a YA best seller.

So in all honesty The Unbecoming of Mara Dyer By Michelle Hodkin starts off pretty awesome, beginning with that lush front cover - I mean, does that not just scream read me ?!! Mara is a pretty typical teen going through some not-so-typical shit - her two best friends and boyfriend died when a building collapsed on all four of them leaving Mara the only one escaping with her life. Traumatised and confused, she and her family move to Florida to begin a new life and also to allow her lawyer father to work on a pretty huge case of child abduction and murder. There Mara meets Noah, English Wonderboy Extraordinaire who has some shit of his own going down.

Mara experiences all these visions and freak-outs and happenings and really, these were well written for the most part - tense and creepy with an air of what the fuck is happening which I enjoyed. But there was just so much of them that the whole story seemed to grind to a rather painful halt - to say this story is a slow burner is a serious understatement. Mara turns a corner and sees her dead friend watching her and then oops Mara looks in the mirror and there's her dead friend again. Mara envisions her classroom collapsing all around her and then once again Mara sees the walls cave in and Mara sees the light fitting smash to the ground and then what do you know Mara sees the hallway outside her bedroom switched round and hey would you look at that there's a cardboard box lying there that wasn't there before and a photograph of her grandmother is staring at her. There were too many hallucinations which made absolutely zero addition to the actual plot, so they all began to feel kinda pointless. This book could have been a helluva lot shorter that 452 pages if some of this crap had been cut.

"Mara, I have never felt about anyone the way I feel about you. And when you're ready for me to show you," he said, brushing my hair to the side, "I'm going to kiss you." His thumb grazed my ear and his hand curved around my neck. He leaned me backward and my eyes fluttered closed. I breathed in the scent of him as he leaned in and kissed the hollow under my ear. My pulse raced under his lips.
"And I won't settle for anything less."

We also would have gotten along a lot faster if some of this bullshit romance had been ripped out and tossed in the trash. Noah is perfection personified - a super hot boy, with an English accent and an endless supply of cash who latches on to Mara and then spends every waking minute protecting her and driving her around, sucking up to her parents and brother while his own parents remain conspicuously absent allowing him licence to do pretty much whatever he wants. As well as being complete nonsense he was just so card-board cutout it hurt to read about him. He was just so damn special but at the same time so achingly flat that to be honest, I just didn't give a fuck. Not a single fuck

And saddest of all is that all the staring into each other's eyes, lusting after each other and flirtatious banter that Mara and Noah participated in completely took away from Mara's little dilemma of her increasingly cray-cray visions and hallucinations. Mara kinda just forgot in amongst all the diving off to Cuban restaurants and trips to Noah's Grecian style mansion that she had the little problem of people dropping dead around her to contend with.

Mara herself is an alright protagonist. She's kinda sassy and she's got a voice although some of her insults are a little odd - crotch pheasant and asscrown ?!! But she was really lacking something, some spark or something. I wasn't really feeling it. She has a distinct lack of guilt surrounding the death count she has experienced recently. She literally rolls around on the floor laughing raucously when she discovers her Spanish teacher blue and rather dead on her classroom floor.

"I stumbled out from under the archway on to the sprawling green. The sun blinded me and I wanted to punch it in the face. And thinking that made me giggle. Then my giggle turned into a cackle. Soon, I was laughing so hard tears streamed down my face. My neck felt wet and I was out of breath and I dropped to the ground beneath a tree at the far corner of the campus, laughing madly and twisting in the grass, gripping my sides because they hurt, damn it, but it was just so funny."

What. The. Actual. Fuck. I am not following. This happens moments after Mara discovers her deceased Spanish teacher, blue lips and all. I seriously began to lose faith in Mara after this little display. I just don't understand.

She's very callous about most of the fatalities. She misses her best friend Rachel but as far as Mara is concerned all the other people who seemed to keel over after they had some kind of contact with her can go to hell. I just can't believe that an apparently mild mannered sixteen year old girl could be so ruthless. I mean, she cares for like two pages after her only friend at school, Jamie is set up and then accused of threatening another student with a knife. She makes zero attempt to stand for up for Jamie, not even getting off her ass to speak to the principal about what really went down. And then the only reason she ever thinks of poor Jamie again is because she's fretting over her F in Spanish. I'm really not surprised Mara has only one friend if she's going to behave like this much of a bitch. Of course, soon all that matters to her is Noah.

The plot takes a serious nosedive in the latter half of the book and really I lost the thread of what was actually happening as any of the story not concerning Mara locking eyes with Noah seemed to take a back seat and became more and more convoluted until it felt like I was reading the book through a fog of perpetual confusion. There's something about a witch doctor and then a bunch of dreams and Mara spends like, three days in bed for an unspecified reason. Her mother, who to begin with was quite an interesting character - an overbearing but loving psychotherapist of Indian heritage, aggressively concerned for her daughter's mental health and well being - seems to just drop off the face of the earth. Mara's adorable and supportive brothers gradually fade into the distance also, sadly as they were great characters and it was nice to see a portrayal of loving and caring sibling relationships. It seemed that rather than follow through logically with the story introduced in the first half of the book, the author decided instead to just shoehorn a bunch of crap in there and hope for the best. The ending was most bizarre. I'm not even sure what entirely was going on if I'm honest. Something about Noah having some kind of ultrasonic hearing and there being leeches at the zoo and then shots were fired the end. Yeah - I don't know.

I'm really disappointed with this book. It was such an awesome premise and I was meaning to read it for such a long time but I think instead of being the sophisticated, atmospheric supernatural mystery I was hoping for I got yet another mildly paranormal teen romance which belongs on the shelf next to Fallen or Hush Hush. It was poorly thought out with a very unsatisfactory conclusion and waaaay too much focus on da boyz. I am semi intrigued to see where Ms Hodkin will take the rest if this series because we are left with a lot of unanswered questions at the end of this book, but wether I actually have the energy to stomach more of Mara and Noah's tru lurve is another story.

Ciao for now my friends !!